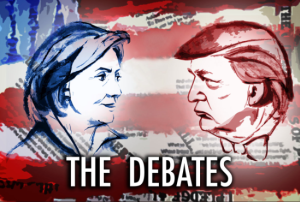 After their big success doing the Democratic primaries, Theater in Asylum is now creating theatrical adaptations of the general election match-ups.

To beginn, they are watching each debate to analyze its content. Later on, they will devise an original piece around it, and present it live in NYC.

“With mimicry, abstraction, and earnest curiosity, we seek to illuminate the candidates, their policies, and their characters.”

Before Hillary Clinton launched in her campaign speech last Friday night at a New Hampshire fundraiser, she made sure to thank the “thousands of volunteers” who braved the bitter cold to get out the vote for her.

“I know how hard you are working. Across the state [you bring] your dreams and determination into this effort, knocking on doors in the winter cold,” Clinton said.

On the eve of the primary, the Democratic as well as the Republican candidates rely on thousands of volunteers working for them in the Granite State. Some are locals; many are not. In fact, many of the out-of-towners who flocked to New Hampshire this weekend were from New York.

Here are some impressions of the Democratic McIntyre-Shaheen 100 Club Dinner in Manchester, New Hampshire.

Both Hillary Clinton and Bernie Sanders attended the fundraiser and spoke to the an excited crowd of almost 6,000 activists.

New Hampshire is the first-in-the-nation-primary and voting starts on Tuesday.

To read more about the event, check out the live reporting from me and my fellow NYU students at The New Hampshire Chronicles.